Wild oats, (genus Avena), are a variety of tufted annual grasses of the family Poaceae, native to Eurasia and Africa. Wild oats are sometimes cut for hay, and young plants provide forage for grazing animals. All species have edible seeds, and domesticated oats (Avena sativa) are an important cereal crop in temperate climates around the world; several other species are locally important food crops. A number of wild oat species are considered weeds in agricultural fields and can be difficult to eradicate.

Wild oats are erect grasses with long flat linear leaves. The inflorescences are typically large and loose and bear minute bisexual flowers. The ovary is characteristically hairy, and some species feature long awns (bristles) on the seeds.

One of the best-known species is the common wild oat (A. fatua), which has become a common field and roadside weed; originally native to Europe and C and SW Asia, it has now spread throughout temperate regions of the world. It grows in small tufts about 0.9 to 1.2 metres (3 to 4 feet) tall. Mature spikelets are bell-shaped, with bent bristle-like projections.

Wild oats grow with abandon all over my garden, popping up in borders and vegetable beds alike. I love seeing their feathery heads dancing in a summer breeze. Some heads are long and narrow, others, where the individual seeds within the seed head have started to separate and mature, are wide and bell-shaped.

As a food for humans, the seeds are particularly valuable. The seed ripens in the latter half of summer and, when harvested and dried, can be stored for several years. It has a floury texture and a mild, creamy flavour. It can be used as a staple food crop in either savoury or sweet dishes. The seed can be cooked whole, though it is more commonly ground into a flour and used as a cereal in all the ways that oats are used, especially as a porridge but also to make biscuits, sourdough bread, etc. The seed can also be sprouted and eaten raw or cooked in salads, stews, etc. Roasted, the seed can be used as a coffee substitute.

Birds love the seeds once they are ripe, my chickens can strip a plant of its seedheads in seconds.

Medicinally, it is considered a diuretic. Cosmetically, a meal made from oats can be added to bathwater or used as a facial scrub. The straw has a wide range of uses such as for bio-mass, fibre, mulch, paper-making and thatching.

My design for this tam uses several elements of the wild oat plant; the three-part seedhead on its drooping stem, the leaves, and the opening head revealing the three seeds themselves. The interlocking elements create another fortuitous motif, heart shapes in different sizes. 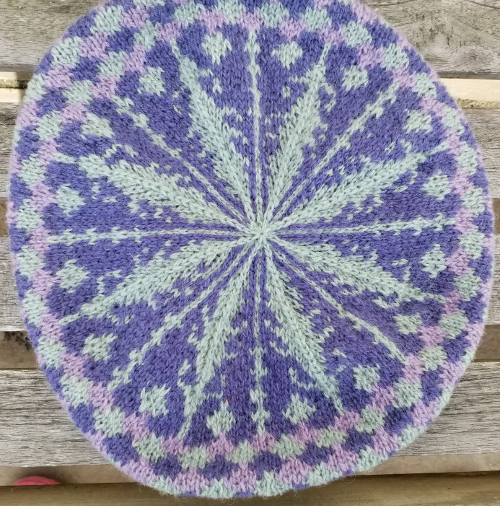 This is the second in my collection of tam patterns based around the theme of Weeds, this pattern uses three colours of Jamieson’s Spindrift yarn to create a distinctive hat.

The teasel is a fascinating plant, very well guarded by sharp spikes along stem and leaf margins, with a mass of tiny lavender-coloured flowers bursting through the seed head in bands, starting with the centre of the flower head and then moving in waves down to the base and up to the tip. They may be little flowers but they nevertheless provide abundant nectar for bees, ants, and hoverflies, and once finished flowering the goldfinches move in to feast on the seeds.

Although the teasel does not generally provide food for humans, the young leaves are edible although one must take great care to avoid the spiny, stout hairs. Teasel leaves can be consumed raw, cooked or added to a smoothie. The root can be used in a tea or for making vinegar or tinctures. The root has many health benefits as it contains inulin and a chemical that destroys the itch mite causing scabies.

It does, also, have an important place in the history of fibre. Dipsacus fullonum or Fuller’s teasel, was widely used in textile processing, providing a natural comb for cleaning, aligning and raising the nap on fabrics, particularly wool. It differs from the wild type in having stouter, somewhat recurved spines on the seed heads. The dried flower heads were attached to spindles, wheels, or cylinders, sometimes called teasel frames, to raise the nap on fabrics (or tease the fibres). By the 20th century, teasels had been largely replaced by metal cards, which can be made uniformly and do not require constant replacement as the teasel heads wear. However, some people who weave wool still prefer to use teasels for raising the nap, claiming that the result is better; in particular, if a teasel meets serious resistance in the fabric, it will break, whereas a metal tool will rip the cloth.

The brown, oval, spiky seed heads of the teasel are a familiar sight in all kinds of habitats, from grassland to waste ground, even cultivated in gardens for their use as an ornament.

The the design for this tam was inspired by the spiny bracts that guard the seed head, and the overall pattern of tiny flattened triangles seen when you look deep into the seed head. 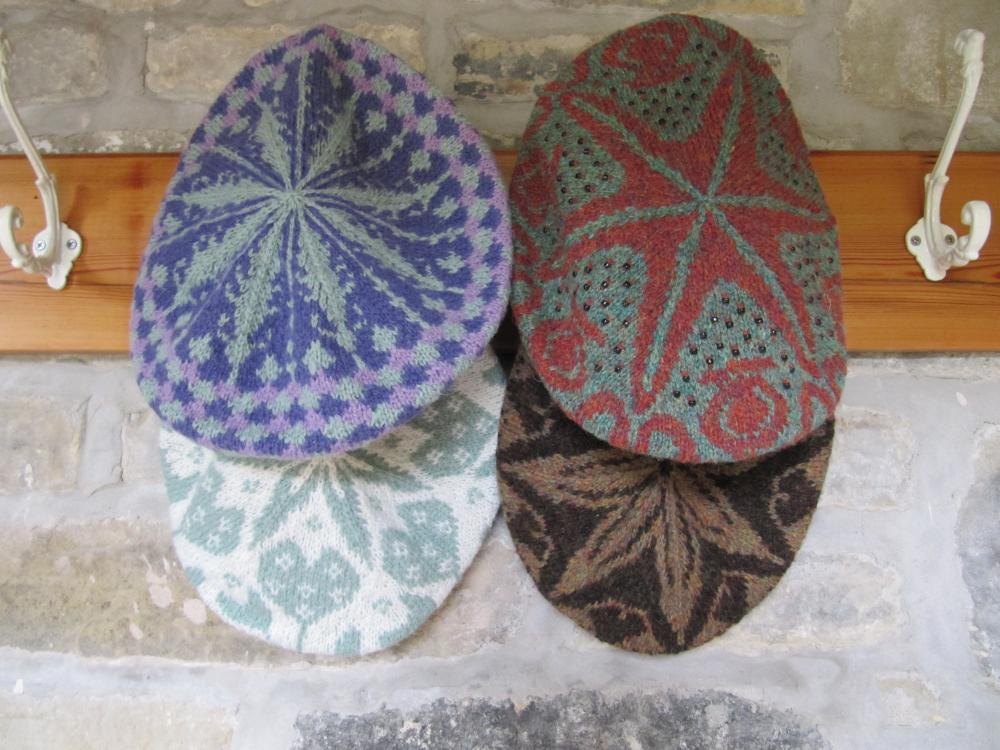 Weeds are just plants that are growing in the wrong place. They may have been self seeded, blown by the wind or dropped by passing birds. We root them out and throw them on the compost heap, or burn them, or smother them in toxic chemicals; we rarely look at them and see their beauty, we disregard their utility as food or medicine for either ourselves or for animals or insects; they are not worthy of study or preservation.

There are so many weeds that I admire, my so-called vegetable garden is full of them. It is true, not everything can find a place in a garden, but everything has something to offer the earth. Take stinging nettles, for instance; they sting you if you are unwary, they grow where you don’t want them, and scurry underground to pop up to form large clumps if you let them. But they are an enormously useful plant. They are a host plant for butterflies such as the Small Tortoiseshell and Peacock, and for ladybirds, which lay their eggs on nettle leaves to provide food for their larvae. Their seeds are a nutritious food source for wild birds, shrews, field mice. They provide nitrogen to enrich the compost heap, their leaves and stems can be steeped in water to provide “nettle tea”, a valuable liquid feed for vegetables and fruit bushes. They can be used to feed animals and humans; they contain a lot of minerals and vitamins: they are high in magnesium, calcium, iron and vitamin A, as well as protein, making them a superfood for humans and livestock. The leaves can be used for teas, pesto, soup and as a vegetable, cooked like spinach. The leaves can be dried and crumbled into feed for chickens to give a vitamin boost during the winter months. And beyond all of that, the stems can be left to dry where they stand during the winter, and in the spring, the retted fibres can be processed into a yarn not unlike hemp. Not so useless after all!

I have chosen five weeds as inspiration for this collection of tam patterns: Shepherd’s Purse, Wild Oats, Poppy, Teasel, and Thistle. All grow very well in my garden in West Yorkshire, UK; some I leave for birds to eat the seeds (goldfinches are particularly fond of teasel and thistle seeds), some seeds I collect to scatter in wild places (poppies are a delightful and welcome sight growing in unlikely places), some I root out when their work as foodsource has completed, and they become valuable compost additions.

Everything has a place and a purpose, even weeds.

The first weed I have chosen for the collection is the Shepherd’s Purse, Capsella bursa-pastoris. It grows almost unnoticed in my vegetable beds, and then suddenly everywhere there are stems covered in seed capsules. I collected and pressed a number of the stems so that I would have a permanent design resource. The result is the tam pattern based upon the seed capsules, but also utilising the tiny star-like flowers and the corona of leaves typical of the plant. 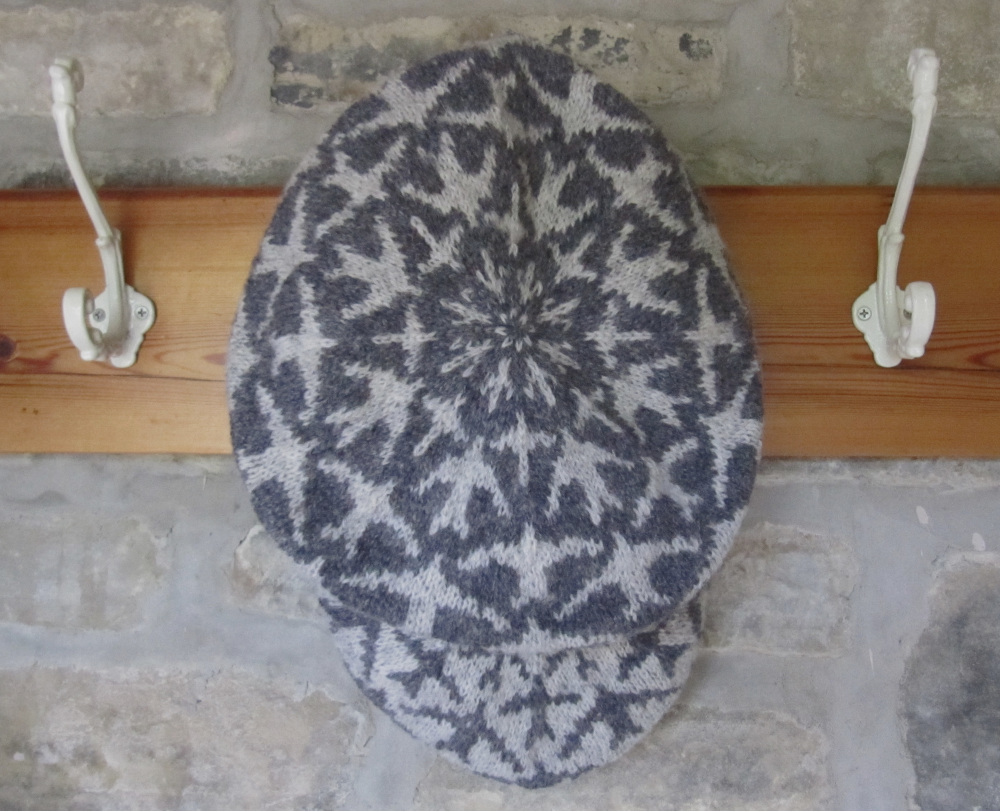 The European Swift is a much loved visitor to the UK, but one which is sadly in decline. This tam pattern celebrates swifts wheeling over the English countryside in summer, an iconic sight and sound. I have chosen a monochrome palette for this tam; you could use bright or muted colours. Instructions are given for four sizes, to fit small, medium narrow, medium wide, or large. The narrow and wide sizes refer to how full the tam part of the hat is. This tam is roomy and warm.

The Swifts Tam pattern is available from the Granary Knits Payhip Store. There is a 25% discount on all tams, just enter coupon code Tam25 at checkout. 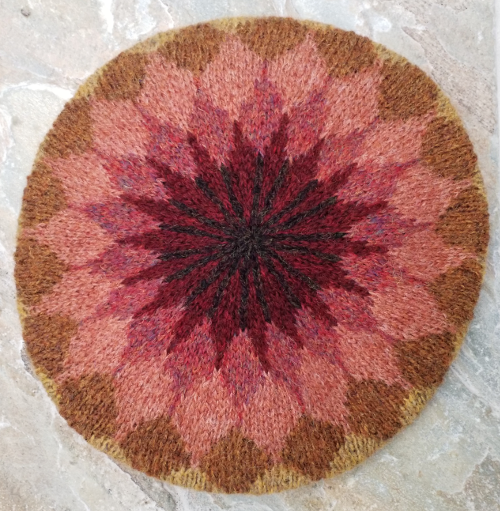 This tam pattern features the beautiful leaf colours of the European Beech tree in Autumn. While the lower branches are still green, the middle and upper tiers graduate through yellow, russets, and rich red shades. Instructions are given for four sizes, to fit small, medium narrow, medium wide, or large. The narrow and wide sizes refer to how full the tam part of the hat is. The hat, being a tam, is roomy and warm.

The Autumn Beech Tam pattern is available from the Granary Knits Payhip Store. 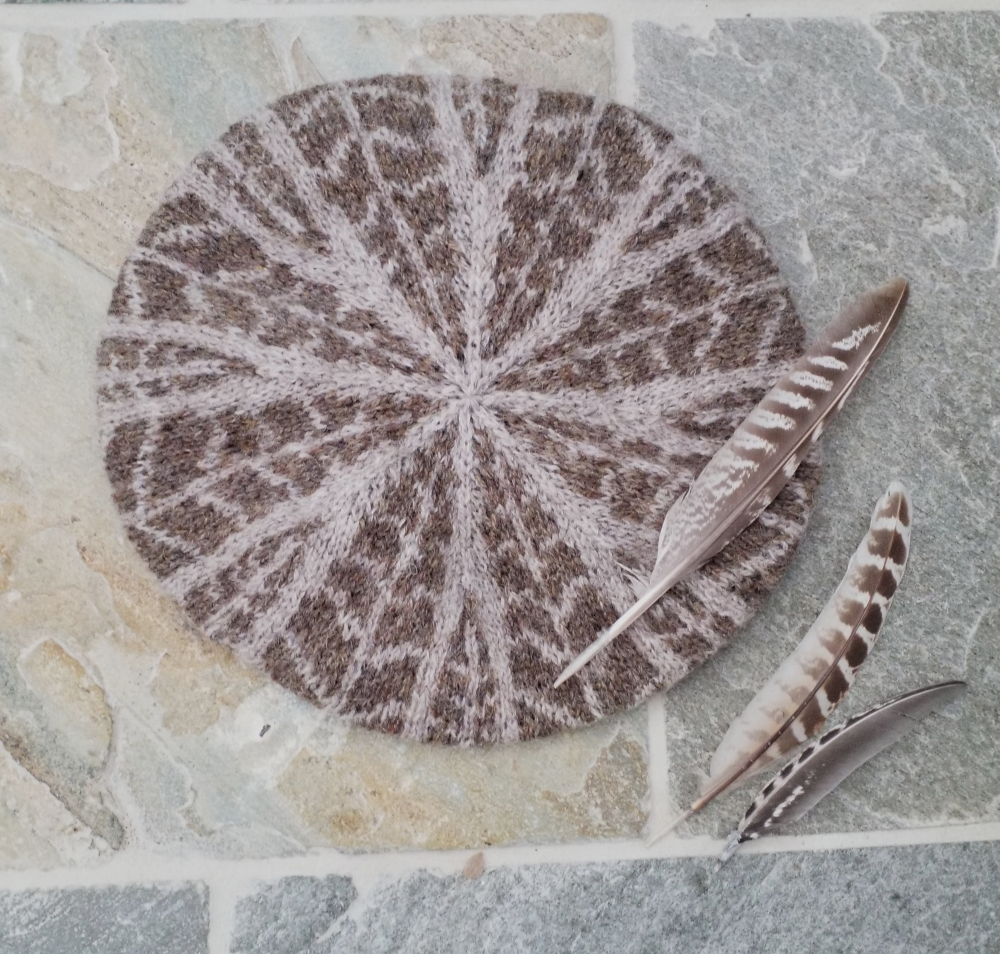 This tam features some of the myriad patterns seen in the feathers of the female pheasant. Often overlooked because of their shy nature and outshone by the more flamboyant colouring of the male, these beautiful pheasants inhabit my garden all year round and are a constant source of delight and inspiration. Instructions are given for four sizes, to fit small, medium narrow, medium wide, or large. The narrow and wide sizes refer to how full the tam part of the hat is. This tam is roomy and warm.

The Pheasant Tam pattern is available from the Granary Knits Payhip Store.