Lace shawls are my favourite knitting project. I have knitted quite a few over the last few years. Last year I set myself a personal challenge to knit a shawl a month for twelve months, and I completed the challenge in February 2016. I loved doing it and it gave me great insight into the way shawls are constructed, and what makes a great shawl (as opposed to just a very nice shawl). The following is my selection of five superb lace shawl designers.

Rosemary Hill (Romi on Ravelry)
Romi does design the most beautiful shawls. Last year, during my personal challenge The Year of Knitting Lacily, I knitted Asterope from her collection of Seven Small Shawls Year 1: The Pleiades. In fact I bought several of her small shawl collections and could have knitted any one of them, they are all gorgeous! I love the attention to detail, the interesting construction, and in the case of Asterope, the stunningly beautiful border.

Verybusymonkey
Verybusymonkey on Ravelry is a very busy lady indeed. She has published nine collections of shawls as ebooks, as wells as patterns for socks, hats, etc. Her trademark design feature is intricate patterning, not always lacy, that relates to the story of the shawl. For instance, she has designed several sets of shawls on the theme of scientists, shawls named Newton, Tesla, Darwin, Galileo, and so on; each shawl shows an element of the discovery for which that scientist is famous. So the Tesla shawl has a border representing alternating current; the Newton shawl illustrates Sir Isaac Newton’s Third Law of Motion; the Darwin shawl shows the evolution from a single simple shape through successive layers to a beautiful intricate border. I have not yet knitted Darwin, but I know I will soon!

Nim Teasdale
NimbleNim on Ravelry has produced a fabulous collection of shawl designs. I love the way they are constructed. She will provide two or more

charts for a particular shawl and you decide, based upon how large you want the shawl or how much yarn you have at your disposal, on how many repeats to do of each pattern.  It is a very flexible design methodology, and is a wonderful way of using up every scrap of a precious skein. During my challenge last year, I knitted two of her designs, Whirlwind Romance and  Slow Dance, and I loved knitting both of them. On my ToDo list is Ashputtel and The Peacock’s Tale (although, really, I could knit any or all of them!)

Jane Araujo
Jane Araujo may not have the output of some of the designers listed here, but what she has produced are gorgeous! Nightso

ngs is the loveliest all-over-lace pattern you will ever see, and it is so easy! It is another pattern where, as long as you have enough yarn, you can just keep adding repeats, and I like patterns like that! I knitted my version in Baa Ram Ewe Titus, colourway Eccup (a lovely deep teal), but I’m thinking of knitting another one in a yarn with a long colour change,  such as Kauni, as the samples that have been knitted in variegated yarns look stunning. So far I have only knitted Nightsongs, but Jane’s other shawls all feature on my ToDo list, starting with the wonderful conflagration of Lace and Entrelac that is Dianna.

Anna Dalvi
Anna Dalvi designs beautiful complex-looking shawls with a story behind each one. Her Mystic Shawls collection is full of beautiful airy lusciousness; The Ancient Egypt in Lace and Colour ebook has fascinating designs based on the symbolism of colour in ancient Egypt. I have not yet knitted any of Anna’s designs, but I do love drooling over the patterns! I particularly like the triangular shawl Seth for its bold geometric patterning; and Memphis, because it is a pi-shawl and I really want to knit a pi-shawl!

I am a follower of quite a few blogs. These are my top five favourites at the moment, in no particular order.

Donna Druchunas
Donna designs the most wonderful shawls, lacy tops, and stranded colourwork socks and mittens inspired by Lithuanian and Estonian traditional patterns. On her blog she writes about knitting, designing, and living in Vermont. Her patterns can be found in Ravelry, and in books, such as Arctic Lace and Ethnic Knitting Discovery.

Kate Davies
I love Kate Davies’ stranded designs and I love her blog. She is so open and honest, reading it you feel like you are sitting chatting to a friend over a cup of coffee! I have knitted her Rams and Yowes blanket, her Peerie Flooers beanie, and her Northmavine Hap – the most wonderful rippling colourful interpretation of the traditional Shetland Old Shale pattern.  She has published many patterns on Ravelry and in book form. I particularly like The Colours of Shetland which has some brilliant colourwork designs, including the aforementioned Hap.

Being Knitterly
Nikki Merrell is a knitwear designer and writes a very interesting, if rather sporadic, blog featuring articles on techniques.  I am particularly fascinated by her dissection and analysis of how a knitted fabric is constructed,  and what actually happens when we knit a stitch. She is also very inclusive, giving instruction for both right and left handed knitters and for those who knit in the Continental style, not just for English style knitters.

Attic24
Attic24 must be one of the most visited craft blogs on the internet; Lucy has thousands of followers worldwide, and rightly so. She writes about her love of the Yorkshire Dales, her caravan, spring flowers, decorating, her family; but above all of those she writes about her love of crochet and of colour. And her crochet is really colourful! It leaps off the page, it’s vibrant,  joyous, ecstatic. I love it. In fact, it was finding Attic24 some years ago that rekindled in me my dormant love of yarn and got me back into full time crafting.

She writes clear photo tutorials of her designs, which are free, and which include the Summer Garden granny square blanket above – my interpretation in a more subdued palette!

The gemstone knitting stitch markers have been made, photographed, described and tagged, and now they have arrived in store. They look fabulous!

There are sets of lapis lazuli, rose quartz, snowflake obsidian and the stunning amethyst

This coming week, I shall be working on stitch markers using Chinese Turquoise and Amazonite (a beautiful pale green).

Visit my Etsy store for these and more lovely stitch markers! 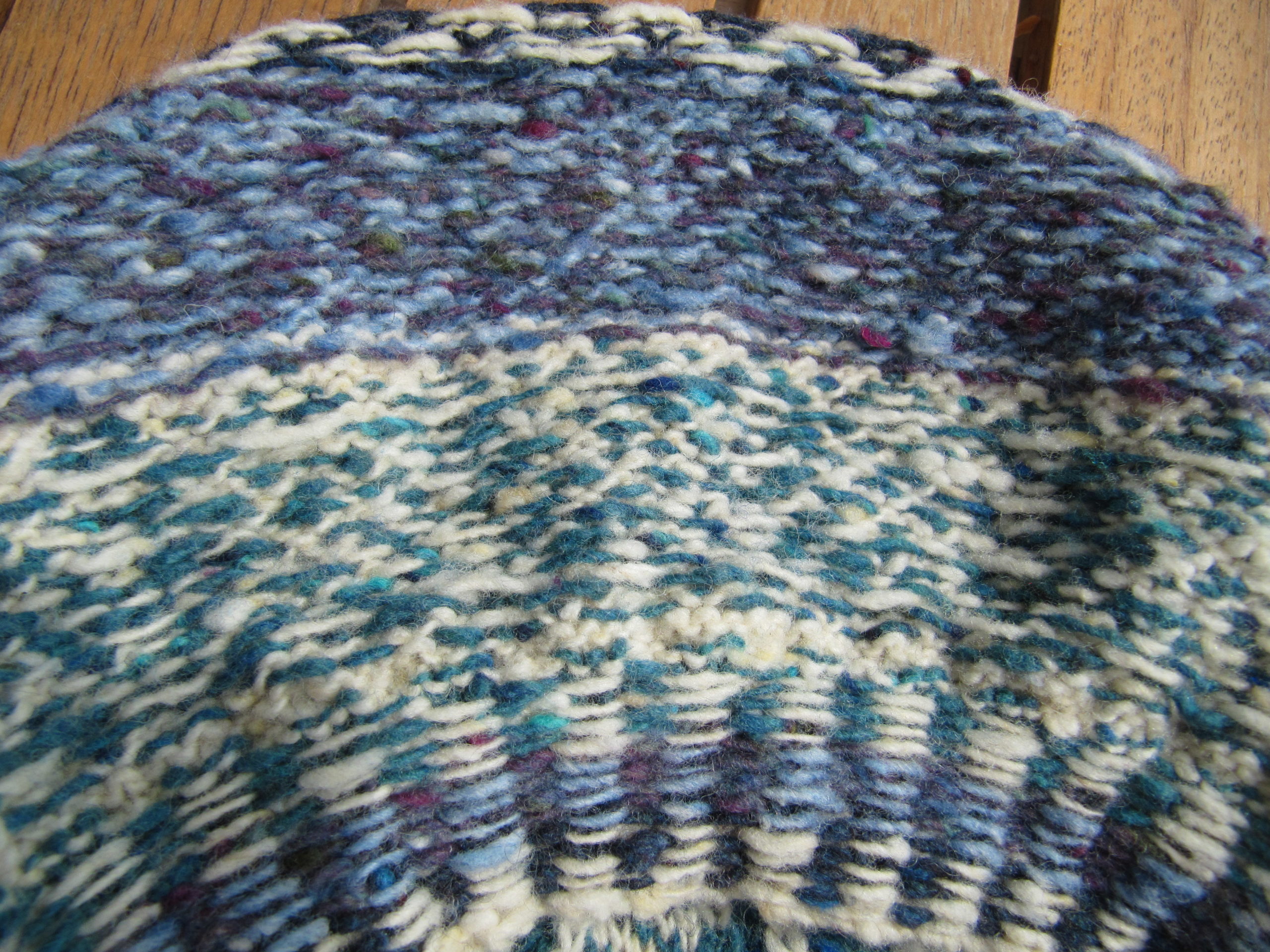 I have been working on some new stitch markers in the last few days and my test knitters are currently trying them out for ease of use. Here is a sneek peek at some of the upcoming additions to the shop.

Visit the Etsy shop to see these and more unique stitch markers.

The vast majority of knitters go through life never having used a stitch marker. Even if they do need a marker for a project – to indicate a placeholder in a pattern repeat for instance, or to show where a round begins when knitting something in the round – they are quite likely to grab the nearest scrap of spare yarn, knot it into a little ring and slide it onto their needle.  It doesn’t matter that it is cumbersome to use,  won’t slip easily from one needle to the next, or gets inexplicably knitted into the fabric! It is only needed the once and can be discarded at the end of the project.

If, however, you are like me,  and you love knitting complicated lace patterns, or intricate Fair Isle designs, then you find you need a constant supply of markers, and the little yarn rings are no longer adequate, indeed they are shown up as the irritating  awkward things that they are, actually impacting your creativity and slowing your productivity .

I took up lace knitting about six years ago and immediately found that I had to buy some markers, as the pattern repeats were difficult to follow.  I bought a set of five markers from my local yarn store, which had imported them from a women’s collective in India. They were fabulous, colourful paper beads made from recycled material, and they worked very well, but there was one small problem; the large ring that slips onto the knitting needle was a jump ring, and with use began to open slightly. It only took a very small gap to occur and my yarn kept getting caught in the ring, and I had to keep stopping and disentanging the yarn before I could continue knitting. I bought a second set, this time online, and since they were specially modelled polymer clay, they were quite expensive. But they were in the shape of chickens so well worth it! I experienced the same problem – the gap in the jump ring eased slightly open and the yarn snagged. So the price didn’t matter,  the construction was the issue.

My husband, whose hobby is electronics, came up with a solution; solder the jump ring shut. He did this for the first set I had bought, and when I saw how effective the result was, I asked him to teach me soldering so that I could make some more markers.
I riffled through my jewellery box and came up with a couple of pairs if fancy, cheap earrings, the kind you buy to wear on holiday and then push to the back of a drawer when you get home. They were easy to take apart, and each pair yielded six or eight charms or beads. Once attached to 8mm jump rings – and soldered of course – these provided me with a tidy number of stitch markers.

Since then, I have made hundreds of stitch markers, from old bracelet charms and earrings, to new charms and beads found in the stash of shiny things left over from my jewellery-making hobby. Most I kept for myself, but some I gave to knitting friends and they encouraged me to try to sell them. I sell through my local yarn store, run by the lovely and supportive Mary, and in February 2016 I opened an Etsy store, listing some of my reclaimed and new one-of-a-kind stitch markers. It is early days yet, but I do see a market for well-made, unusual, slightly quirky knitting “jewellery”!