Turquoise is one of those colours that just about everyone loves, and the gemstone Turquoise does not disappoint in the rich variety of its shades of light bluey-green. It is the birthstone of December, bringing colour and light to the dark months of the year.

The chemical composition is aluminium silicate which also contains copper, although the turquoise found in North America actually contains iron rather than aluminium; the latter tends to have dark veining.

Two types of Turquoise are commonly available: African and Chinese, although the stone is mined in many places around the world. African Turquoise tends to be a darker blue/green than Chinese, with darker threading throughout. Both types take polish well and gleam and glitter in jewellery. 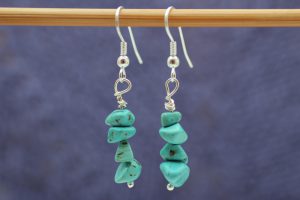 You can see all the turquoise items in the Granary Knits shop here.