Tourmaline is the birthstone of October. The name is derived from Sinhalese, Turamali (meaning stone of many colours); it was mined in Sri Lanka for centuries, but first imported into Europe by the Dutch in the early 18th century. 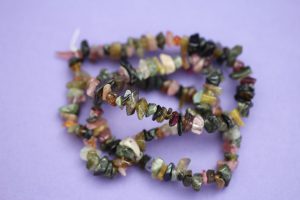 Tourmaline is actually a group of gemstones, rather than a specific single stone (like lapis lazuli or peridot), and depending upon its colour its name can vary, from Achroite (colourless) to Verdelite (green). The chemical composition distinguishes the different forms of tourmaline; so Dravite is named after deposits found near the river Drave in Austria/Carinthia and contains magnesium; Elbaite is named after the island of Elba in Italy and contains lithium; and Tsilaisite is a local Madagascan name and contains manganese.

Tourmaline is found in a huge range of colours and is usually sold in mixed strings or bags, so that the jewellery made from it has a vibrant look and feel. The stones polish well, and the colouring is rich in each stone. Earrings made from tourmaline are unusual and intriguing!